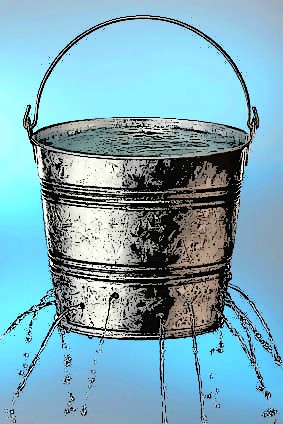 Recently, we had long rains in Kenya and all media houses, were reporting of how floods were destroying homes, roads, and farms. This was devastating for me considering those who were being affected, were low income citizens. However, what got may attention is, despite of the heavy rains, people in Nairobi could not access water, due to water shortage. How on Earth was there water shortage, despite the long rains which were causing rivers to flood???

People could not understand the puzzle, until the government came out with a report, that the main dam providing clean water in Nairobi, was still at it’s lowest levels, since it didn’t have enough water. But how could that be??The sad news was, the dam was leaking and it had no capacity, to hold enough water to support people who were depending on it for water. I later on realized, no matter how much it rained, the dam could not get to its fullest capacity, due to leaking which had been happening for years.

Using the above illustration, let’s look at Luke 8:43-48 Now a woman, having a flow of blood for twelve years, who had spent all her livelihood on physicians and could not be healed by any, came from behind and touched the border of His garment. And immediately her flow of blood stopped. And Jesus said, “Who touched Me?” When all denied it, Peter and those with him said, “Master, the multitudes throng and press You, and You say, ‘Who touched Me?’”But Jesus said, “Somebody touched Me, for I perceived power going out from Me.” Now when the woman saw that she was not hidden, she came trembling; and falling down before Him, she declared to Him in the presence of all the people the reason she had touched Him and how she was healed immediately. And He said to her, “Daughter, be of good cheer; your faith has made you well. Go in peace.”

The woman with the issue of blood, had suffered this condition for years, however her faith to touch the cloak of Jesus, facilitated her healing. Her health issue made her financially broke, she had lost her self-esteem, which is evident by the way she received her healing, in short, her physical health was leaking, which made her desperate to be restored to wholeness.The issue of blood made the woman nonproductive and whatever she had, she used it with the physicians, who were not able to cure her ailment, however Jesus restored her to wholeness.

So, where am I going with all this?? In life, whenever you have any leakage that is draining your spiritual growth as a believer, it will always hinder you from maximizing your fullest potential, in fulfilling your God given purpose.  Bad habits, harmful addictions, lack of character, or wrong relationships, will always cause you to have leakage of God’s flow in your life.

Take Note: Whatever you are not willing to allow God to rectify in your life, will automatically hinder you from becoming all that God created you to become.

Trust me on this my beloved, any leakage will hinder the word of God from taking root in your life.You will end up wasting resources ,opportunities will flip throw your fingers, you will end up being non-effective in what God has commissioned you to do, you will not be zealous for God, due to discouragements of life and in most cases, you will be dependent on what is happening around you, than what God wants you to do, from within you.

Currently, people in Nairobi are still experiencing water shortage due to leakage, which is yet to be fixed. The truth of the matter is, this issue can be fixed but……………

Do you still have buts in your life, despite of God revealing to you, what needs to be fixed but you are not willing to surrender to God and allow Him to fix you???

Heavenly Father, you are my Lord and creator and today, I admit I need you to reveal to me, any form of leakage in my life that is causing me to stagnate in life and non-productive. I am fully aware, you created be to over flow with your abundance and I choose to surrender my life to your instructions, in order for you to fix me. With all due humility, I ask you Lord to fix any leakage in my life, for the glory and honor of your everlasting name. I thank you for what you have done and I give you praise. In Jesus mighty name I do pray and believe, Amen, Amen and Amen.

Love you all and am praying for you.

Keep on saying it until….