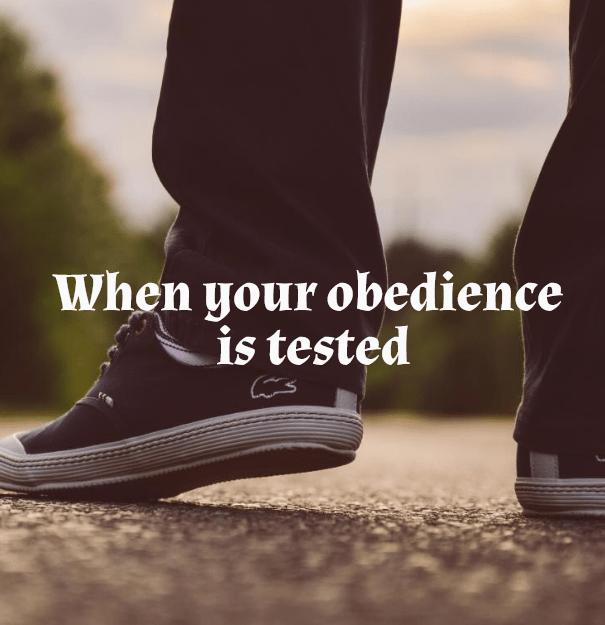 Happy new month beautiful people, for the past couple of days I have been studying the book of 1 kings. It’s absolutely amazing yet humbling, when God gives you different revelations in one context of scripture. Last week, I blogged about Your place of Authority from 1 Kings 18 and while meditating on that same context of scripture, God revealed to me about our obedience to Him, being tested in difficult times.

From this same context, we have prophet Elijah an oracle of God and Obadiah a servant, who was serving under the governing system of King Ahab. While studying this particular context of scripture, a phenomenal attribute stood out in both of them which was OBEDIENCE.

1 Kings 18:1And it came to pass after many days that the word of the Lord came to Elijah, in the third year, saying, “Go, present yourself to Ahab, and I will send rain on the earth. God gave a word to Prophet Elijah but before God could establish that word, Prophet Elijah had to show forth Himself to King Ahab. Not only was He supposed to show Himself to Ahab, he had to exercise His God given Authority by allowing God to use Him to show case God’s power and who should be worshiped.

Elijah was a man who was being sought after by Jezebel to be killed. 1 Kings 18:9-10So he said, “How have I sinned, that you are delivering your servant into the hand of Ahab, to kill me? As the Lord your God lives, there is no nation or kingdom where my master has not sent someone to hunt for you; and when they said, ‘He is not here,’ he took an oath from the kingdom or nation that they could not find you.

He was not being sought after to be killed because of anything wrong he had done like a wanted criminal??No, no, no He was being sought after, for His bold move of rebuking the King, his wife Jezebel and the children of Israel from turning their backs from God.1 kings 17:1 And Elijah the Tishbite, of the inhabitants of Gilead, said to Ahab, “As the Lord God of Israel lives, before whom I stand, there shall not be dew nor rain these years, except at my word.”His bold prophetic declarations from God, did not please the people.

Despite of the fact he was being sought after to be killed, he chose to obey God’s instructions, which would reveal the power of God to the children of Israel.His obedience to God’s first instruction, opened up the Heavens for rain as God had promised Him.

As a believer in the body of Christ, your entire life is a ministry. You don’t have to be in the five-fold ministry, to obey God’s instructions that pertain manifesting His power. The power of God is not limited to your profession, you can be a teacher, a lawyer, a doctor, an accountant or whatever profession you are called into and still manifest the power of God Your level of obedience to God in your area of calling, is the real pudding on the cake.

1 Kings 18:3-6 And Ahab had called Obadiah, who was in charge of his house. (Now Obadiah feared the Lord greatly.For so it was, while Jezebel massacred the prophets of the Lord, that Obadiah had taken one hundred prophets and hidden them, fifty to a cave, and had fed them with bread and water.) And Ahab had said to Obadiah, “Go into the land to all the springs of water and to all the brooks; perhaps we may find grass to keep the horses and mules alive, so that we will not have to kill any livestock.”So they divided the land between them to explore it; Ahab went one way by himself, and Obadiah went another way by himself.

Obadiah was a servant of King Ahab but had not been influenced by the system of Jezebel, to worship false gods. His fear for God made him use his position, as a close servant of the king, to take a risky move in hiding the prophets of Yahweh from being killed by Jezebel.

He used his position wisely in the midst of wickedness, to preserve the remnant of God. I believe there are many believers in the body of Christ assigned to government posts or to cooperate posts in the market place but how are you using your position for God’s glory?? Are you willing to stand for righteousness, in the midst of injustices and corruption??Are you willing to set yourself apart for God’s use in the Babylonian system??Are you willing to use your position of influence that God has entrusted you with, to maintain integrity despite oppositions from people who love to coarse with wickedness??

Obadiah was also obedient to the prophet of God by adhering to follow a tough instruction, that would cost him, his own life. He knew very well he had hidden 100 Prophets of Yahweh from being executed by Jezebel and in this scenario, a prophet who was being sought after, by Jezebel to be killed was giving a directive to inform the King he wants to meet with him. This was a direct execution for Obadiah, if Elijah failed to show up.

Obadiah level of obedience stood out, which reveals how our obedience to God’s prophets, can be the bridge of allowing God’s move to be evident in our own lives,our Nations, our communities and our generation in general.

Sometimes, God will use a prophet to give you a tough instruction that seems absurd in your own limited reasoning that will change your situation or an entire generation, but how obedient are you willing to follow that instruction from a place of faith ??Amos 3:7 Surely the Lord God does nothing, Unless He reveals His secret to His servants the prophets.

Please hear me out champion, nothing goes to waste when you are led of God, no matter how tough an instruction might seem to your own carnal mind. Now faith is the substance of things hoped for, the evidence of things not seen Hebrews 11:1

Love You All and am definitely praying for you………