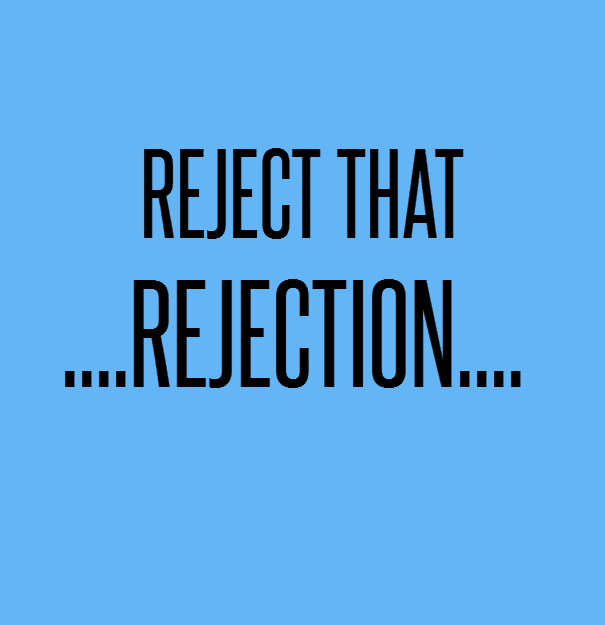 Have you given up on your dreams, or your passion because of some rejection you have faced??Have you shied away from finishing that project, from pursuing that gift within you because some people told you, you will never amount to anything??Have you stopped doing what God instructed you to do because nobody believes in you, no one supports your idea and you feel all alone??Today this post is purely penned down with you in mind.

Facing rejection is not an antidote to giving up but the fuel to keep you on doing what you were created to do. I know it’s pretty tough to stay focused on what you believe you are supposed to do, while facing rejection at the same time. One thing we all need to know is, not everybody will pat you at the back and agree with what you are doing, if they can’t recognize your vision, gifts and talents.

This only means, there are specific people that are cut out to your ‘niche’, who will agree with your dream, who will appreciate your gifts and they will support your vision but before all that comes to a reality be passionate, consistent, persistent ,committed and stay focused in doing what you know you are created to do .Instead of getting discouraged, getting bitter towards people who are rejecting you ,use that rejection to your advantage to stretch your faith, to refine your skills and to work on your attitude.

The test of rejection is designed to help us learn the strength within us and in refining the treasure in us, without giving up. Despite the challenges you might face in pursuit of your dreams being resilient will keep you focused in the midst of rejection. Throwing up the towel, thinking you are all alone, having a pity party or looking for sympathy from all the wrong places is not the solution to rejection but an antidote to your stagnation,learn to motivate yourself.

Honey!!!You are neither the first one nor the last one, who will face rejection before you make it. The rejection of men opens you up to the power of God.He separates you from men,to unveil His glory. I ‘ll list down several people who have made such a positive impact in our generation yet they faced rejection after rejection yet made it in life and some left such a rich legacy.

I can’t list down the list of people who have made it in life despite rejection without touching on Joseph in the book of Genesis 37.Joseph was rejected by his own brothers because He was different, he had a dream, he thought in a different way and his father loved him more than the rest of his siblings. if you are facing rejection because of your dream ,your gift and talents ,that clearly means, you are unique, you think differently, you desire change than comfort and God is purely convicting you, to manifest what He has deposited within you.

No matter what Joseph went through from rejection by his own brothers, to falsely being accused in Potiphar’s house, to him being imprisoned for an offense he did not commit, his gift as a dreamer never fizzled out.Everybody around him became a dreamer while he was in prison and his gift impacted people positively.It’s my prayer to all my blog readers, to press on even in the midst of rejection. Don’t allow rejection from people to chock what you carry within you but to press forward to your promised land.

I will share incredible people who have made it in our time, despite facing rejection after rejection but they have impacted the world in positive ways through innovation, revolutions and leadership.

Disney began his career by being fired by a newspaper for not being creative enough. Later, his Mickey Mouse cartoons were rejected because they were deemed to be “too scary for women.” If that wasn’t enough, “The Three Little Pigs” was also turned down because it only had four characters. Today because Walt chose not to listen to any of his critics and press forward towards his dreams, we have Walt Disney Company

King is a best-selling writer (currently 350 million books sold and climbing) whose work has been made into several motion pictures. However, his first work was rejected 30 times, which lead to King throwing it in the trash. Thankfully, his wife made him keep working at it.

Known as Colonel Sanders of Kentucky Fried Chicken fame, Sanders had a hard time selling his chicken at first. In fact, his famous secret chicken recipe was rejected 1,009 times before a restaurant accepted it.

These brothers battled depression and family illness before starting the bicycle shop that would lead them to experimenting with flight. After numerous attempts at creating flying machines, several years of hard work, and tons of failed prototypes, the brothers finally created a plane that could get airborne and stay there.

This Nobel Prize-winning, twice-elected Prime Minster of the United Kingdom wasn’t always as well regarded as he is today. Churchill struggled in school and failed the sixth grade. After school he faced many years of political failures, as he was defeated in every election for public office until he finally became the Prime Minister at the ripe old age of 62.

During his lifetime, Van Gogh sold only one painting, and this was to a friend and only for a very small amount of money. While Van Gogh was never a success during his life, he plugged on with painting, sometimes starving to complete his over 800 known works. Today, they bring in hundreds of millions.

Incredibly popular in the early 20th century, this adventure book writer began his career as a dentist, something he quickly began to hate. So, he began to write, only to see rejection after rejection for his works, being told eventually that he had no business being a writer and should given up. It took him years, but at 40, Zane finally got his first work published, leaving him with almost 90 books to his name and selling over 50 million copies worldwide.

Being one of the best and successful movie producers in America, no matter how people did not believe in his work that never stopped him from pursuing his dream in the movie industry. He once wrote “From 1992 until 1998, every show I put on flopped. No one showed up, and I lost all my money. I wanted to give up. I thought I had failed, but the truth is, I never failed. Each and every time the show didn’t work, I learned something new. I learned what not to do and what I could do better,” You have to understand that what you may perceive to be a failure may very well be an opportunity to learn, grow, get better, and prepare for the next level. If you find the lessons in what you perceive to be failures, then you won’t ever fail at anything. “Everything I learned during the “learning” years (that’s what I call them now) has helped me in the “harvest” years (that’s what I’m living in now). Don’t be hard on yourself. You haven’t failed. Find the lesson so you can use it when you get to your harvest.”

Learn from rejection!!!Nothing is impossible, if you can only choose to reject that rejection and trust God with every step He directs you. Nobody can drive a parked car! As you step out in faith despite the rejection, you will definitely discover what needs to be discovered along the way.

Rejection can disappoint you, depress you and may even stop you in your tracks… learn not to take rejection so personally… if you’re honest with yourself and believe in your work, others will too.     Bev Jozwiak

Rejection doesn’t have to mean you aren’t good enough; it often just means the other person failed to notice what you have to offer. Ash Sweene

Don’t let anyone, or any rejection, keep you from what you want.     Ashley Tisdale

Every rejection is incremental payment on your dues that in some way will be translated back into your work.     James Lee Burke

Rejection isn’t failure. Failure is giving up. Everyone gets rejected. It’s how you handle it that determines where you’ll end up.     Richard Castle

If we live for people’s acceptance, we will die from their rejection.     Lecrae

Declarations:-You are destined for greatness, you are the head and not the tail, above only and not beneath. You are for signs and wonders in this generation and nothing by any means will hinder what God has planned out for you. The Lord will make room for you in places you only imagined and you shall be fruitful in the Land, in Jesus mighty name Amen, Amen, Amen.

Reject that Rejection and press forward to your promised land.

The Best Is Definitely ahead Of You

Know God For You.