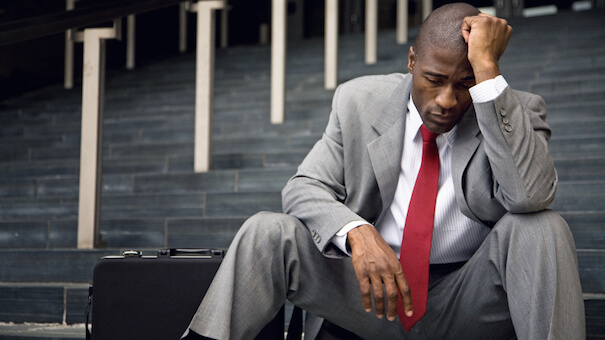 Happy new Month world changers, it’s always a joy and an honor to pen down what God instructs me to write .Am totally grateful to God that He has entrusted me with this online plat form to minister His word to people from all walks of life. On this particular post, am on a mission to minister to anyone who is going through discouragement. You wish the world could cave in, you have no rough idea on what to do and your focus is too clouded due to what you are going through .Trust me on this, I might not offer you a quick fix as per the world standards to your situation but only the gospel of Christ which has the power to deliver hope and a turnaround to your situation on this platform.

People from all walks of life whether successful or unsuccessful, go through discouragement in life. I might not know what you are going through right now but personally!!! I can relate with this because I have gone through rough patches in life where I felt so discouraged. When you are going through detours in life where you face discouragement, the enemy uses this as an opportunity to make you lose your confidence,focus, interest and passion . Truth be told,discouragements in life can easily make us forget who is in control, we may look weak with no faith and more often, it comes to destroy men of faith and make us become short sighted concerning the things of God

Let’s look at the life of Elijah in 1 kings 19:1-14 And Ahab told Jezebel all that Elijah had done, also how he had executed all the prophets with the sword.  Then Jezebel sent a messenger to Elijah, saying, “So let the gods do to me, and more also, if I do not make your life as the life of one of them by tomorrow about this time.” And when he saw that, he arose and ran for his life, and went to Beersheba, which belongs to Judah, and left his servant there.But he himself went a day’s journey into the wilderness, and came and sat down under a broom tree. And he prayed that he might die, and said, “It is enough! Now, Lord, take my life, for I am no better than my fathers!”Then as he lay and slept under a broom tree, suddenly an angel touched him, and said to him, “Arise and eat.” Then he looked, and there by his head was a cake baked on coals, and a jar of water. So he ate and drank, and lay down again. And the angel of the Lord came back the second time, and touched him, and said, “Arise and eat, because the journey is too great for you.” So he arose, and ate and drank; and he went in the strength of that food forty days and forty nights as far as Horeb, the mountain of God.And there he went into a cave, and spent the night in that place; and behold, the word of the Lord came to him, and He said to him,

From the above context, Elijah a man who God had used tremendously in showing forth His might, power and glory, was a fugitive in his own mind. He was afraid of Jezebel threats and this led him to being so discouraged that he felt his zeal for God was of no use. He got into state of depression where he felt lost, he was filled with loneliness, failure, self-pity and even asked God to take his life. But despite of his discouragement, God was not yet done with him.This only means, despite of what you are currently facing in life no matter how tough it is ,God still has your back.Being confident of this, that he who began a good work in you will carry it on to completion until the day of Christ Jesus.Philippians 1:6

Prophet Elijah still had an assignment to complete and that’s why God pushed him to arise above discouragement by feeding him and sending him forth 1 Kings 19:7-8 And the angel of the Lord came back the second time, and touched him, and said, “Arise and eat, because the journey is too great for you.” So he arose, and ate and drank; and he went in the strength of that food forty days and forty nights as far as Horeb, the mountain of God.Please take note:-All the discouragements we read in the bible of what great men went through, help us to  become more aware that we are humans and nature dwells within us.

Maybe you have lost a job that you gave your best shot, you had a divorce despite of trying to work things out to save your marriage, you lost a business deal in spite of you not compromising your values or maybe your children are acting out crazy yet you have done your best as a parent, to bring them up in God’s ways. Let’s be real here, no sugar coating!!!Such seasons in life come yet they never last, if we choose to arise above discouragement. But someone will ask me, how on Earth am I supposed to arise above discouragement???

Good question, we arise above discouragement by intentionally:-

1.Feeding on God’s word and believing what He says in regards to our situation. Don’t allow life experiences shape your view of God’s word,allow God’s word to shape your experience 1 Kings 19:7-8 “Arise and eat, because the journey is too great for you.” So he arose, and ate and drank; and he went in the strength of that food forty days and forty nights as far as Horeb, the mountain of God.

2.Getting to a place of prayer just like Elijah at mount Horeb and listen to God’s next instructions. 1 Kings 19:15 Then the Lord said to him: “Go, return on your way to the Wilderness of Damascus; and when you arrive, anoint Hazael as king over Syria

3.Encouraging ourselves in the Lord. Stop looking for pity parties and learn to motivate yourself. 1 Samuel 30:6 Now David was greatly distressed, for the people spoke of stoning him, because the soul of all the people was grieved, every man for his sons and his daughters. But David strengthened himself in the Lord his God.

4.Who is in your convoy? Whom do you walk with ? Whom do you confide with the secrets of your life? Discouragement makes people to go alone, If possible have few confidants who are mature, honest and see the best in you despite storms in life.If you walk alone, fear will kill you and discouragement will put you to death; two are stronger than one. Elijah was caught up with the victory that had taken place and after this victory there was a big descent from this victory ,when he came down from the mountain and he felt like a failure.The word of God clearly shows us in Matthew 17:1 Now after six days Jesus took Peter, James, and John his brother, led them up on a high mountain by themselves. Jesus had a set of three not a crowd who were close to Him. Job 2:11 Now when Job’s three friends heard of all this adversity that had come upon him, each one came from his own place—Eliphaz the Temanite, Bildad the Shuhite, and Zophar the Naamathite. For they had made an appointment together to come and mourn with him, and to comfort him. Jesus and Job had their set of three.

5.Always remember past victories that God revealed His glory on your behalf and be fully aware, He will do it again.Psalms 126:1 When the Lord brought back the captivity of Zion,We were like those who dream.

6.Choose to be happy despite the storms.Just because it’s stormy now,doesn’t mean that you are not headed for sunshine.1 peter 4:12-13 12 Beloved, do not think it strange concerning the fiery trial which is to try you, as though some strange thing happened to you; but rejoice to the extent that you partake of Christ’s sufferings, that when His glory is revealed, you may also be glad with exceeding joy.

Take note:-The hand of the Lord was with Elijah in the wilderness and also in his time of victory. Some of the discouragements you go through in life, is because of burn outs and your body wears out. If you are discouraged stand on mount Horeb(the mountain of God) just like Elijah did and the Lord will work to bring you back after strengthening you. The Lord is not in the noisy places but He can be found in a quiet place. It is not over until the Lord says it is over; the hand of the Lord is on you. Your discouragement could be your passage to the next level.

Elijah had his high seasons in life, as well as his low seasons .Most of the time when we are fearful, we tend to forget the resources around us, we forget who is in control and we simply forget whose we are. People who fear and forget what God has done in the past,are said to be short sighted and loose faith just like Elijah had after threats from Ahab and Jezebel. If we experience victory over and over, we should be very careful because a period of discouragement will come along our journey path.We should learn from the life of Elijah who was greatly discouraged but kept going strong.

If Elijah had not allowed the threats of Jezebel get the best of him, he would have confronted her knowing what God had done in the past,He would still do it again. Whatever you might be facing in life, it is good to stop and reflect what is this trying to contend with you and who is inside of you.For the One inside of you is greater than whatever is trying to contend with you. When you are discouraged, it is good to face the fear and overcome it.1 John 4:4 Little children (believers, dear ones), you are of God and you belong to Him and have (already)overcome them (the agents of the antichrist); because He who is in you is greater than he (Satan) who is in the world (of sinful mankind).

Choose to encourage yourself in the lord and understand this truth, the Lord is always with you in whatever situation you are going through .There is no season or  obstacle that lasts forever .God would not have allowed that particular situation in your life, if He didn’t put the capacity within you to over come it.

40 Days of glory finally kicks off today from 4:30pm to 7pm @my home church Jcc Kenya. Make plans to attend with an expectant heart, for miracles to happen.Miracles are the manifestation of the power of God. 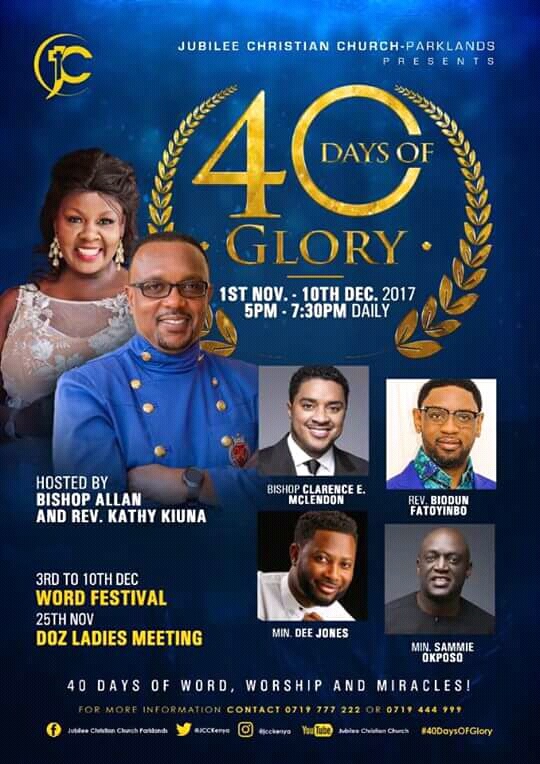 Most assuredly, I say to you, he who believes in Me, the works that I do he will do also; and greater works than these he will do, because I go to My Father

Love You All And Am Praying For You